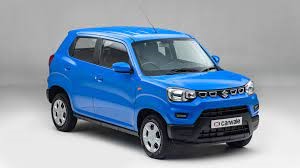 When Suzuki introduced the S-Bledsoe last year, I was eager to try it, but was a little worried that the move would disappoint me. Stilts are nothing but high notes, right? Based on 20-year-old Japanese design, not only Alto, but Maruti Alto. While Japan gets the honest-to-goodness all-wheel-drive kei SUV, we get the hatchback.

But the S-Presso is not based on the Maruti Alto. Instead, it’s a completely new design based on the same HEARTECT architecture of the new Swift and Ertiga. But is it any good? Let’s find out.

The S-Presso may be small, but it’s not lacking on the road. Maruti-designed crossovers have a solid look that’s nothing like the Japanese-designed Jimny. Tall shoulders and slack lines give a big punch, while black-lined fenders accentuate the S-Presso’s relatively high 180mm ride height.

Up front, the S-Presso features a beautifully sculpted grille that pays homage to the previous Jimny. The grille is so good that Suzuki of Japan adapted it for the Ignis facelift. Of course, cornering is fair game, as the kinks in the rear shoulder and waistband appear to be inspired by the front Ignis.

But Suzuki S-Presso has its own personality. It’s a fantastic design, only the small 14-inch wheels with fixed hubcaps and the front fog lights should let it down a little in the void left over them. At least the rather bland appearance of the launch variant is addressed by adding shields and side cladding. Better survive with car park scrapes!

Despite its Indian heritage, the S-Presso has the feel of a modern Kei car. Full of chunky and purposeful shapes made from durable plastic. The seats sit cartoonishly high from the floor with sweeping views of the windshield. The vertically stacked dashboard leaves plenty of knee room, but the driver’s pedal box places your right knee on the center console.

Although there’s a lot of tough plastic here, it feels solid and doesn’t wobble or rattle. A large central hall houses digital instruments, a 7-inch infotainment touchscreen and window and door controls. This makes the door card itself feel bland, and the thin plastic on the lower door is the only objectionable material here. Still, the thin door cards mean extra elbow room, and there’s noticeably more room here than an older Alto or Jimny, but it’s a lot harder to sit three in the back than a Celerio .

The S-Presso, on the other hand, has a larger boot, which is larger compared to Celerio’s 235 at 239 liters. While its shade is smaller than those of its competitors, none can match the S-Presso’s sturdy tonneau cover wrapping rack.

The S-Presso uses the same 67-hp three-cylinder K10B engine and five-speed transmission as the Celerio, with a taller final drive to compensate for the taller tires. This makes its gearing simply incredible, first hitting top load at 35kph. Combined with an ultra-light 770kg curb weight, this allows the S-Presso to do 0-100kph in 12.5 seconds, about half a second faster than the Celerio or the old K10 Alto. The shifting action is precise but dimpled, while the clutch is springy but light. Without the tachometer, you have to go with your ears, which isn’t difficult since the engine isn’t particularly quiet.

Short gears and a bluff body shape limit fuel economy to 25-27km/L at 80kph, compared to 29+km/L for the Celerio. But as the engine cracks, it gets better. Consumption in light traffic hovers around 13 km/l, which is not bad.

The S-Presso is a joy to drive traffic. Combining the Alto’s compact size with the commanding heights of a crossover, it filters traffic with ease and fits anywhere a three-wheeler can go. The short overhang gives it an approach and departure angle that Jimny surpasses, which makes jumping off curbs very easy. Note that this is not to say that you should drive on the sidewalk. Neat dimensions, tiny turning circle and standard parking sensors allow you to slip into a parking space too small for any other purpose.

The S-Presso is impressive on the open road. At 100kph, there’s a lot of wind noise around the pillars, and the buffet can push you down the highway. However, the steering was relatively stable and the Indian-made 165/70R14 MRF ZVTV ‘ecotred’ tires proved to be relatively quiet and grippy tires. Body roll around corners reminds you that the car is taller than wide, but the feather-light curb weight and controllable suspension make the S-Presso nimble and safe enough on even the roughest roads.

The S-Presso’s standard kit is reasonably priced. The 7-inch touchscreen features Bluetooth connectivity and comes with two fairly ordinary speakers, remote locking, and more. On the plus side, it gets extra safety kit compared to the Indian version launched last year, which scored poorly in crash tests due to the lack of airbags and seatbelt force limiters.

Our local version comes with seat belt pre-tensioners and force limiters, dual airbags, and even ISOFIX child seat latch points in the rear – a feature missing from the Indian version. It hasn’t been tested, but the Celerio (which also didn’t do well in India’s tests) scored three or four stars in Europe and Australia with the same safety upgrades. The S-Presso is expected to be retested when it launches in more Asian and Latin American markets in the next few years.